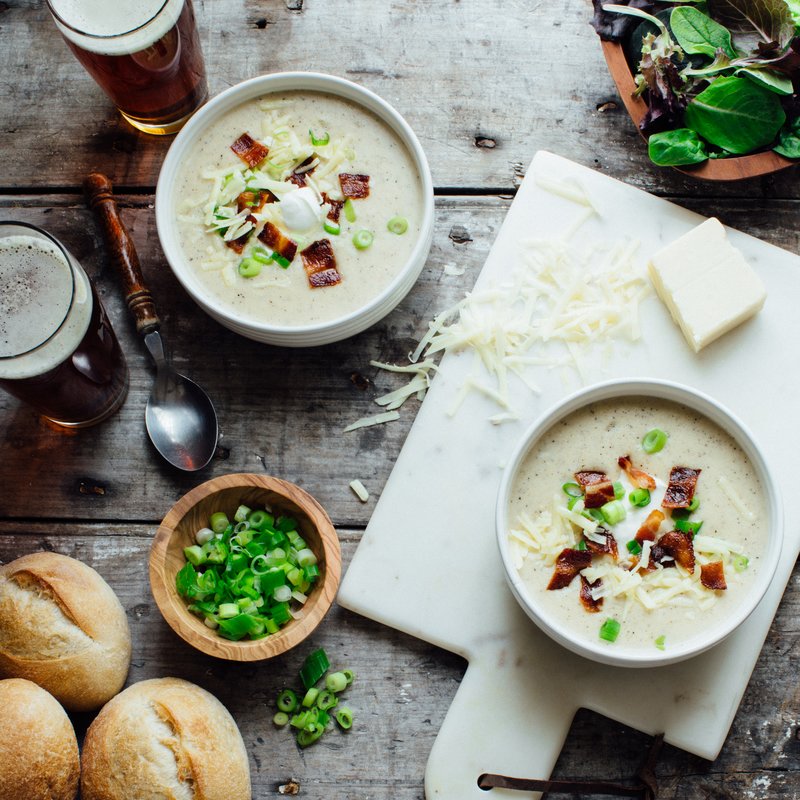 There’s baked potato soup and then there’s this LOADED baked potato soup! Guess which one we prefer? You guessed it! Loaded with potatoes (of course!), crispy bacon, Cabot Extra Sharp Cheddar, Cabot Sour Cream and ale (or beer), this is the version we know you’ll prefer too. Make, enjoy, make again. Then share the recipe with family and friends on Facebook, Pinterest, Instagram, and Twitter.

START making this cheddar baked potato soup by preheating your oven to 350°F. Pierce each potato in several places with a fork and place on baking sheet. Bake until potatoes are tender, about 1 hour.

SLOWLY whisk milk into flour in a large heavy pot. Place pot over medium-low heat and cook until simmering and thickened, stirring frequently so mixture doesn’t stick to bottom of pot.

*For a hearty and satisfying potato chowder, try this recipe for Potato, Cheddar and Corn Chowder. Cabot is a co-operative of 800 farm families and has been producing award-winning dairy products for many years. We’d love to hear your feedback on this loaded baked potato soup, so please rate the recipe after you’ve tried it!

The soup won the Halloween Soup Contest. 1 day off work. The slow cooker was clean by the time everyone was done. Would Highly recommend trying!!! Enjoy!!